Zachary "Zach" Marsh has been missing since the evening of December 20th, 2019. Zach is a 19 year old white male, standing approximately 6'1" tall and weighing 130 lbs. At the time of his disappearance, Zach was wearing a gray hoodie sweatshirt with dark sleeves and a baseball cap. Zach was last seen at a Shell Gas Station in west Nashville, located at 204 White Bridge Road. At the time, Zach was driving a dark blue 2015 Chevrolet Sonic which had a temporary spare tire mounted on the driver's side rear wheel. The permanent license plate for the car was located in the rear window. The car was  found abandoned on Jarrell Ridge Road in Montgomery County the following morning. It was found at a dead end next to the Cumberland River, just upriver from Lock B Road and McCormac Landing.

If you have any information regarding Zach's whereabouts or other places he or his car may have been seen between 4:00pm on Friday, December 20th, and 8:00am on Saturday, December 21st, please contact the Montgomery County Sheriff's Office at (931) 552-1011 or by dialing 911.

There is up to a $17,500 reward for information leading to location of Zachary "Zach" Marsh.

An open letter from the family of Zach Marsh:

"Our family would like to extend the deepest gratitude to those who came out and helped us search for Zach, those of you who supported those searching for Zach and all of you who have been sharing our posts and reaching out asking how you can help. Your love and willingness to help us find Zach is overwhelming and we couldn’t have searched Rotary park without you all there today. Though we were unable to locate Zach or any evidence related to his disappearance, we are happy to at least check this box off our list of possible places he might be- and for your help in that we are forever grateful. Zach, if you are out there and seeing this, your family and community grieves for you. Just call any of us to let us know you are safe. If you know what has happened to Zach, speak up. Save his heartbroken parents from another day of terror and worry. Let them have closure in this."

This photo shows a 2015 Chevrolet Sonic, the type of car that Zach was driving the night he disappeared. Keep in mind that the car had a temporary spare mounted on the driver's side rear wheel, and the permanent tags for the car were displayed in the window. Contact the Montgomery County Sheriff's Office if you think you saw this vehicle between 4:00pm December 20th and 08:00am December 21st.

This is the Shell Gas Station where Zach was last seen on the afternoon of December 20th. The station is located at 204 White Bridge Road in west Nashville. Though the station is on a major roadway, this is a residential area. If you live or work in the area, please try to think of you saw Zach or noticed anything out of the ordinary that day. No detail is too small. If you remember anything, please report it to the Montgomery County Sheriff's Office at (931) 552-1011 or by dialing 911.

This map shows the location of the Shell Gas Station on White Bridge Road in west Nashville where Zachary Marsh was last seen.

This map shows the approximate location where Zachary Marsh's abandoned car was found on the morning of Saturday, December 21st.

How Can I Help?

If you are reading this, then you are already helping. Information is what will ultimately solve this mystery, so the more you learn and the more you share, the closer we will get to finding Zach. Below you will find nine missing person flyers. Below each is a link that will download a printable copy of the flyer. We encourage you to print some of these flyers and post them in and around where you live and work. We never know who might hold the key piece of information that will allow us to bring Zach home. Follow the Find Zach Marsh Facebook Page for the latest information.

No Detail is too Small

People often assume that it takes some type of a major clue to solve a missing persons case. The reality is that it is usually a collection of small details that are pieced together by investigators that ultimately solves the case. It is for that reason that we ask you to share any details you have about Zach or anything that might have happened between 4:00pm December 20th and 8:00am December 21st. You may be holding the key piece of information that investigators need, but not even know it. You may contact the Montgomery County Sheriff's Office at (931) 552-1011. 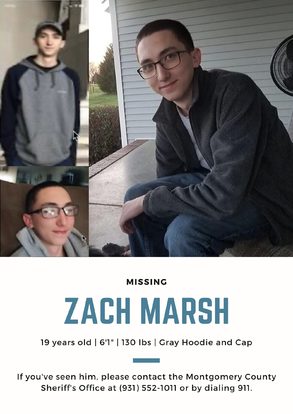 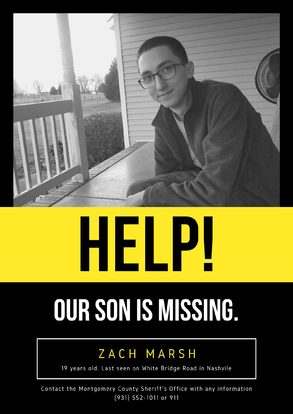 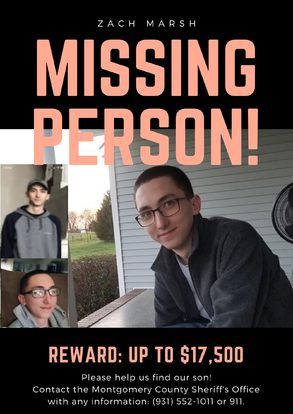 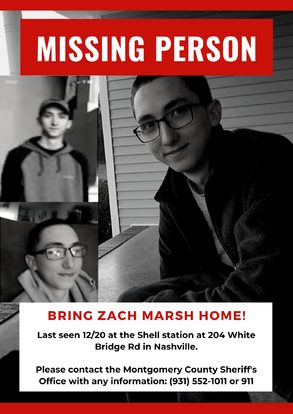 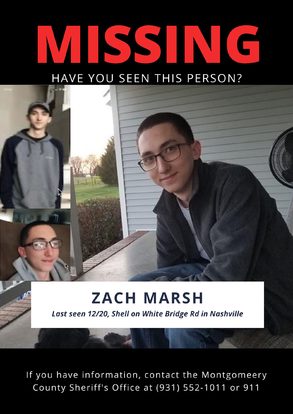 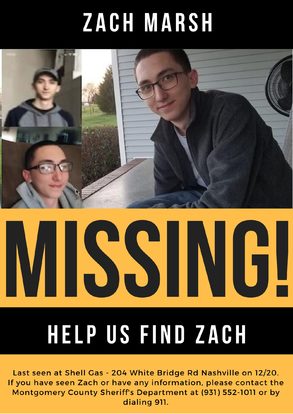 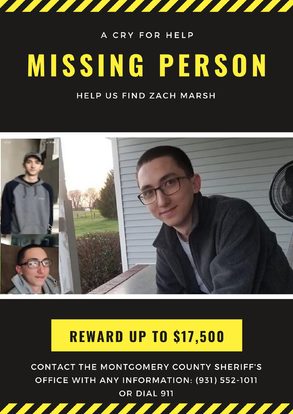